Only 26% of God of War Ragnarok players have finished it

The statistics of God of War Ragnarok begin to give us interesting data, such as that only 26.6% of the players have completed the main story of the game.

God of War Ragnarok came to PS5 Y ps4 a little over two weeks ago. In all that time, the sequel has been resoundingly successful, becoming the best launch in PlayStation history with 5.1 million copies sold.

Of course, the adventure Kratos and Atreus developed by Santa Monica Studio it has hit as hard as Mjolnir, with polished gameplay and a narrative that has left many with more than one tear on their cheek.

The main story of God of War Ragnarok has left us great moments throughout its approximate 20 hours of duration. His ending will undoubtedly be remembered for a long time. And about this we have to talk.

Since it’s been a while since launch, it’s time to see how many God of War Ragnarok players have completed the main story. According to the trophy statistics, only 26.6% have finished the game’s plot.

Here we leave you the capture that shows it taken just at the time of writing this news. Be careful, the trophy contains major spoilers for the plot of the Santa Monica Studio title.

It is expected that this percentage will grow much more with the passage of time., since only two weeks have passed since the game was released. In addition, many players take the opportunity to complete a number of secondary tasks before concluding the story. 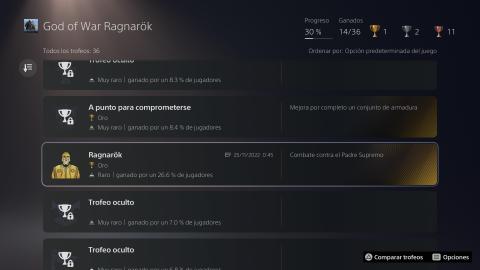 Everything to do after finishing God of War Ragnarok

If you are one of those who has already finished with the main story, you probably have a lot of activities on your to-do list because, despite the fact that the game is not an open world, the nine kingdoms are full of things to do on PS5 and PS4.

You can always check out some of our guides like where are all of Kvasir’s poems in God of War Ragnarok, where to find Tyr (again) in-game after the end of the main story.

You can also take a look at how to get the best armor in God of War Ragnarok, find and fight Gná, the Valkyrie queen, where to get shattered runes or the best Blades of Chaos abilities to level up first.