How to get Koraidon and Miraidon in Pokémon Scarlet and Purple

At this point in the story we will be able to use the legendary Koraidon and Miraidon both mounted and in battle in Pokémon Scarlet and Pokémon Purple.

We have a wide world to enjoy in our games at Pokemon Scarlet and Pokemon Purpleand for this the development team wants to give us facilities from the beginning by having a series of legendary mounts available depending on the version of the game that we have acquired.

However, right at the beginning of the adventure in Scarlet Pokemon and Pokémon Purple we are not going to have these legendaries available, not even in mounted form, and we have to advance a little bit to be able to traverse the world more efficiently.

That is why in this guide we are going to dedicate ourselves to telling you how to get the legendary creatures Koraidon and Miraidon in Pokémon Scarlet and pokemon purple and, once you have them, at what point in the game are we going to be able to use them in combat.

We already tell you, that you probably have to advance a lot in Pokémon Scarlet and Pokémon Purple to be able to use our favorite legendary ones in combat, something logical so as not to give us many advantages.

How to get Koraidon and Miraidon in Pokémon Scarlet and Purple

Due to the vastness of the scenario, we will be able to use the Koraidon and Miraidon mounts almost at the beginning of the game. To do this, we have to finish the prologue, and this includes choosing our starting Pokémon and then heading towards a lighthouse near the house.

Once near the path to the lighthouse, a scene will be activated and we will later go to a cliff. From there we will meet the legendary Pokémon of the corresponding version whom we have to follow towards the Academy Pokemon. As we progress through the game, they will be able to acquire mobility skills such as flying, climbing, and swimming, and this is done by completing different titan challenges. 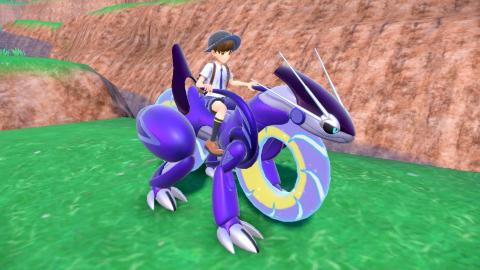 However, we can’t use them in combat until after we’ve beaten the game, basically because they won’t have the ability to fight until the last battle in the story.

Once you’ve unlocked the ability to fight, you’ll be able to switch between his battle and mount forms from the pause menu.

If you need more help for Pokemon Scarlet and Pokemon Purple, don’t forget to check out other guides like where are all the stakes to unlock the shrines.