FIFA 23 has dozens of teams and managers, including Ted Lasso and AFC Richmond from the Apple TV+ series: so you can use Ted Lasso or Coach Bead in career mode, in the Jason Sudeikis skin, and players as Roy Kent or Jamie Tartt in Ultimate Team mode.

FIFA 23 It is already available on PS5, Xbox Series X | S, PS4, Xbox One, PC and Stadia, with a continuation delivery compared to last year, but which is very significant because it will be the last “FIFA” as we know it: the next year will be called EA Sports FC.

At the team level, FIFA 23 has for the first time women’s clubs, with the French and German First Division leagues and international clubs. But EA Sports has given a very “geeky” surprise by including the A.F.C. Richmond…the fictional team from the Ted Lasso series.

In FIFA 23 we can use Ted Lasso as career mode traineror use another “coach” to lead AFC Richmond to Premier League glory, which includes licensing actors like Jason Sudeikis either Brett Goldstein.

In this FIFA 23 guide we explain how you can use Ted Lasso in career mode and all the content from the award-winning Apple TV+ series that is in the soccer game. But first, the funny Ted Lasso trailer in FIFA 23!

Where is AFC Richmond in FIFA 23

In the Ted Lasso series, Jason Sudeikis He plays a lovable American football manager who is hired by a small local London team clinging to survival in the Premier League.

However, AFC Richmond is not found in the English clubs section of FIFA 23. You will be able to find it at the “Rest of the world” sectionalong with other real teams.

In this section there is also Wrexham AFC, a Welsh team from the English fifth division, the protagonist of a docuseries, Welcome to Wrexham, and which was bought by Ryan Reynolds and Rob McElhenney.

Now that you know where AFC Richmond is, you can play with the team in friendly modes, and see Ted LassoCoach Beard and many players modeled after their actors.

How to play with Ted Lasso in career mode

Ted Lasso and AFC Richmond are also selectable in career mode. If you want Lasso to win the Champions League, you can choose it when you start the career mode, because it gives you the option to use real trainers. Remember, it’s in the Rest of the World section.

You can also choose which team you want Ted Lasso to coach. If you stay with AFC Richmond, one of the real Premier League teams will have to leave to give shelter to “the Greyhounds”.

Score of AFC Richmond and its players 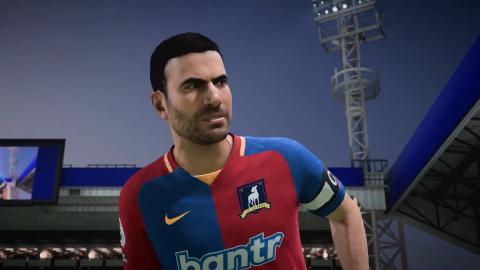 AFC Richmond has a rating of 4 starssomething that can be surprising for a team that is suffocating to stay in the first division.

However, EA has given its players scores according to their history in the game, and therefore it is not surprising that Jamie Tartt be the one with the most points: he is the one with the highest quality, enough to sign for Manchester City, but also the most arrogant; followed by Roy Kent, who won a Champions League with Chelsea… but eight years ago, and is already in decline.

Sam Obisanya and Dani Rojasup-and-coming members of the Nelson Road roster, are also above 80. But if EA Sports wants to stay true to the series’ trajectory, perhaps they should consider upgrading to EA Sports 24.

To complete the roster, EA Sports has created fictional players, but all 10 players featured in the series are represented in FIFA 23:

Are you playing FIFA 23? If so, we recommend you take a look at these guides on Hobby Consoles: Cheap players and hidden gems for career mode, The 25 best players with Alexia Putellas at the helm or the best players in LaLiga, Bundesliga and Premier.

There are also lists of the 23 best players (according to their averages) and the best with all their averages, the best young promises with potential for career mode, the players who have improved their statistics, the fastest players and all stadiums in FIFA 2. 3.

Of course, here you have the analysis and opinion of FIFA 23, now available on PS5, Xbox Series X | S, PC, PS4, Xbox One and Google Stadia (Switch will receive the Legacy edition).