Do you remember the first two Tomb Raider movies? Many fans of the saga believe that Angelina Jolie was the best Lara Croft, something that is made even more noticeable thanks to Unreal Engine 5.

Tomb Raider is one of the great adventure sagas of video games, but it also has its place in the cinema. We are not talking about the new films with Alicia Vikander, but about the first two films of Lara Croft… played by Angelina Jolie. Almost nothing.

Since then we have not seen the actress dressed as Lara Croft again. Can you imagine what a Tomb Raider game starring Angelina Jolie would be like? Many fans dream of this idea.

Technological advances are becoming more and more noticeable, and that is why we are not surprised by what is being achieved with Unreal Engine 5. A Tomb Raider fan has recreated a spectacular modeling of Angelina Jolie as Lara Croft that almost looks like something out of an official video game.

It’s actually a nice tribute to Angelina Jolie’s career. Her portrayal of Lara Croft is a key point to understand the evolution of the saga, as well as the treatment of the leading role.

The video, published by Lorenzo_CGI, shows different looks of Lara/Angelina Jolie. For starters we have the outfit she wears in the first Tomb Raider movie (2001), with her knives and gun.

But the real bombshell for fans comes in the final stretch: Angelina wearing the original look of Lara Croft. We are talking about that blue t-shirt and brown shorts, which more than one still remembers from the days of PS1, Saturn and the 90’s PCs.

”I have chosen to make the image of Angelina Jolie, because for me it is the one that best reflects all of Lara’s personalities. I chose to do the project in UE5, because I wanted to see the power of the unreal engine and its potential in terms of realistic characters.”, assures Lorenzo_CGI.

To recreate Lara’s guns and knives, this fan used Zbrush and 3dsmax assets, which show optimal compatibility with Unreal Engine 5. 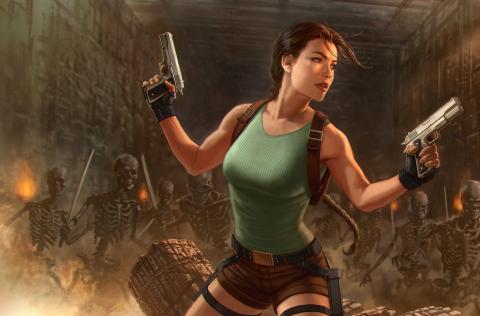 If you want to know more about Angelina Jolie’s story in the franchisewe recommend you read our reviews of Lara Croft: Tomb Raider (2001) and Tomb Raider: The Cradle of Life (2003).

You would like to see a new Tomb Raider movie with Angelina Jolie? Perhaps a new game with the active participation of the actress? Remember that Crystal Dynamics (after leaving Square Enix) is preparing its fourth title in the saga after the trilogy of reboots.